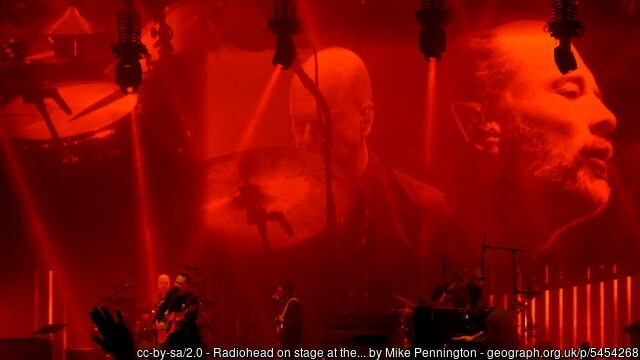 (Part of my 1000 Album Creativity mission where I extract creativity principles for use in business & life by learning to play one song from each of my favourite 1000 albums, and I research the methods, musicians and mindsets that made them possible).

I love Radiohead. They were (and are) one of my ‘go to’ bands. Tom Yorke’s voice, their rich and sometimes disturbing technology centred production values, and the pitch imperfect wails of Jonny Greenwoods guitar all merge together to bring something new to the musical soundscape. Their first album (Pablo Honey (1993)) was nothing special but it did birth ‘Creep’ which became somewhat of an anthem of it’s time. ‘The Bends’ (1995) and ‘Ok Computer’ (1997) are the albums where they really started hitting their stride, followed by the incredible (and at the time difficult to get your head around) Kid A (2000)- an album that signaled a new, ‘ahead of the trends’ direction for the band. All 3 of these albums (along with a 4th- ‘In Rainbows’ (2017)) make it onto my top 1000 albums list.

It is probably the Kid A album however, that gets spoken/dissected the most given its very unique compositional approach, where the traditional song structures of verse/chorus are disregarded for the most part, with much distortion of vocals & words, coupled with multiple layers of computer derived sounds. I remember listening to this album over and over not entirely sure if I liked it or not. I did know one thing at the time- that it was more like art than music- and just like any form of art it can take time to fully unveil itself. In listening to (and trying to learn) the first song on the album ‘Everything In It’s Right Place’ it still feels strange and fresh today. During my research I discovered that Kid A (and some other works of Radiohead) is regarded as a ‘Metamodern’ piece of work. What the hell is Metamodern I hear you say and why is it important to improving creativity?

According to those in the know (Brent Cooper 2016) Meta-modernism is:

Ouch! For the purposes of this article it suffices to say that meta-modernism is something relatively new and something potentially big. Equally important to know is that the theories, principles and ideas behind it are fascinating, sometimes useful and in many instances are still in debate & development. And it is here that I got interested. As much as anything else meta-modernism offers a set of principles that can help us as individuals and as organisations to perceive things in a different and more evolved way.

Here are 4 ‘Meta’ concepts (with reference to the work of Greg Dember 2018) that I think will help drive your creative thinking and be more like Radiohead (their music at least!):

This concept focuses on the engagement of two seemingly oppositional factors without them cancelling out or landing in the average zone between them- what Hanzi Freinacht (2015) calls ‘both-and’ thinking. How can we take two seemingly opposite ideas or ends of the spectrum and synthesise them together to make something better? This is a very powerful tool for creative thinking. Think about the modern workplace and some of the seeming opposites that organisations are trying to deal with- having control on one hand, but freedom on the other. Instead of thinking ‘we can only have one’, thinking about having both is actually a way of thinking differently. In this example asking different questions like ‘under what conditions do we need control and under what conditions do we need freedom’ offers a powerful third way to thinking differently.

How can we take two seemingly opposite ideas or ends of the spectrum and synthesize them together to make something better?

Oscillation is a really powerful visual metaphor in this concept as it highlights modes of total flexibility. For example, if your are a product manager think about your service as an oscillation and explore under what conditions it needs to be in different states that are seemingly opposite. As an individual think about how you can bring opposites into your career- taking a totally opposite skill to bear into your core skill set, merging them together to see what happens. If finance is a core skill set link it with something completely chaotic and see what happens to how you evolve your core skill into something new.

One metamodern concept that really resonates with me is the idea of embracing on going discussions of different ideas to discover broader and deeper patterns or concepts. In this open source world that we live in, it is relatively easy to tap into different ideas and voices. Considering all of this diversity with the ability to stand back without judgement and find new linkages underlying currents and fresh perspectives is great approach to creative thinking. The idea of ‘reconstruction’ is important here as well, in the sense that the purpose of diversity and different dialogues is ultimately to change long held collective beliefs.

The purpose of diversity and different dialogues is ultimately to change long held collective beliefs.

From an organisation perspective this means truly harnessing open models of not just idea development and top level co-creation but a deep commitment to purposeful design through diverse dialogue. Focusing on multiple working sessions each with a different core dialogue or world view and synthesise the diversity to get to somewhere deeper is a good example of this concept in action. From an individual perspective seek out different voices in your core area of interest or professional endeavour to get to somewhere different- absolutely defending your approach whilst being open to integrating diversity to make it better and more inclusive.

A really interesting concept (one that I am still developing my own understanding of) in metamodernism is the idea that the effect of something is as important as what something is or how it has been produced. In essence then no matter what we create or how we create something- the ideas, processes, materials of technologies that go into it- is at best as important (I would argue less important) than the effect- emotional or otherwise- that it has on people, audiences or users. This concept aligns with the ideals of a more human centred approach to design but equally it is much deeper than that. It is about the idea of ‘create to emote’ where the effect or emotion is the thing that is deeply explored and developed.

It is about the idea of ‘create to emote’ where the effect or emotion is the thing that is deeply explored and developed.

From an organisations perspective this could mean starting from the deep emotion we are trying to create internally when it comes to, for example, designing a change program, or externally with a new service, solution or technology and aligning the relevant building blocks to the key emotions. From an individual perspective if you are trying to create a compelling story worry less on slides and materials and more about what effect your are trying to create with or too your audience at different stages in your presentation.

At the core of this concept is to think beyond any artificially constructed barriers and to become comfortable with transcending genres, capabilities, cultures, and even reality. This might sound like a crazy idea but remember this is about creativity and some of the great ideas come applying ideas from a totally unrelated sector to another, or mixing genres to create amazing works of fiction. It equally applies to thinking beyond just the physical and virtual worlds and understanding developing ideas like immersive spaces that merge the best of both worlds.

Think beyond any artificially constructed barriers and become comfortable with transcending genres, capabilities, cultures, and even realities.

From an organisations perspective this means really understanding your challenges & generifying them so you can tap into ideas from places you normally wouldn’t look towards. Asking questions like- What can we learn from theme parks about creating an amazing employee experience? (one of our own research projects @future of work institute Cpl) can bring you to new knowledge sets and new ideas. But equally we don’t need to look towards the real- we might explore science fiction worlds to paint future scenarios for our organisations direction or to spark new ideas for unique solutions. From an individuals perspective it means mixing and remixing ideas from all over the place for your creative project- merging totally different genres and style to get to somewhere new. It means playing with old and new ideas and beyond.

I hope some of these metamodern concepts will spark some new creative ideas as they apply to your world. Be like Radiohead. Be Meta Creative. Over to you!

Disclaimer: For those well versed in Metamodernism- I am no way an expert in the concepts- my focus is on the application of some of the ideas to drive creative thinking.